Elements Residences by GFL Metro is located in 204 Shaw Boulevard, Kapitolyo, Pasig City. Hence, this residential condominium is ideally located as it is at the heart of Pasig City. The booming location is therefore advantageous for would-be residents because it offers accessibility and comfort. And speaking of accessibility, this area provides easy access to public transport while also being close to major thoroughfares.

Lying at the heart of the bustling community in Barangay Kapitolyo in Pasig City, Elements Residences is a refreshing respite after a day of stay in the surrounding centers of activities such as malls, restaurants, schools, medical centers, offices, and transportation hubs. It is accessible via EDSA and Shaw Boulevard. Surrounded by these places essential to modern lifestyle, going home to the Elements Residences is always a testament to a life well-lived.

The choice of Pasig as a location for this residential development goes far beyond accessibility. Pasig is emerging as one of the up and coming business and residential districts in Metro Manila. It is also poised to establish itself as the new benchmark for future residential and urban developments. Its central location also makes it within a short distance from other business districts like Ortigas Center, Makati CBD, and the Bonifacio Global City. And while it is poised to be the new major commercial and residential destination in Metro Manila, it is still in its infancy stage. Hence, now is the best time to invest in a property in Pasig City while the area is still considered to be low density.

The project site for Elements Residences is also considered a “very low risk” area. This is a category that is determined upon the initial ocular inspection of the area where the condominium was to be built on. There are no active fault lines directly or within proximity to the project site. The geodetic tests performed on the site reveal that the area of the site consists of adobe. This is considered as one of the strongest foundations that developers look for when making high-rise developments.

In addition to being free from risk of earthquakes, the site is also considered as one of the highest parts of Metro Manila. Therefore, it very seldom experiences flood. In fact, during Typhoon Ondoy that hit most areas of Metro Manila, the site where Elements Residences was built on was not part of those affected by flooding. The same was also the case during the August 2012 monsoon rain that hit the same areas affected by Ondoy. The fact that the site of Elements Residences makes it free and safe from environmental hazards, you can have peace of mind knowing that your investment is worthwhile. 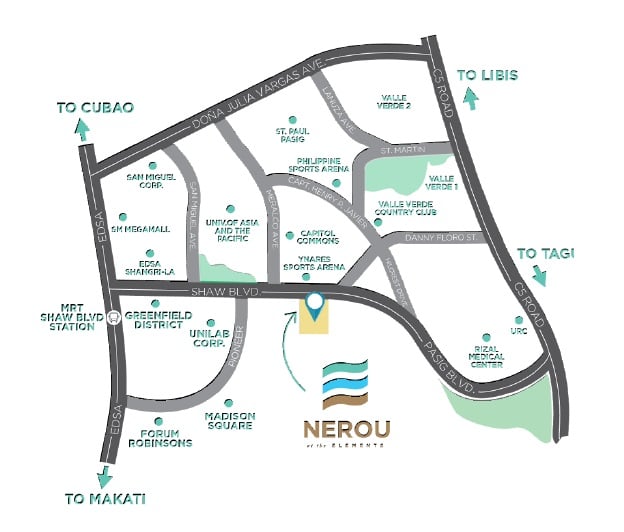 The central location of Elements Residences also means that you are within a few minutes away from the nearby hospitals, shopping malls, and other points of interest in Pasig, or outside of it. For example, major shopping centers like Shangri-La EDSA Mall, SM Megamall, and Tiendesitas are 5 minutes away. Some of the best medical and health facilities in the world are also located within 10-15 minutes away like St. Luke’s Global City and Medical City Ortigas. For business, the Ortigas CBD area is also within a few minutes away. The MRT Shaw Station is also close by.

If you are looking for gastronomic delights in the area, the following restaurants can satisfy your cravings: Amber Golden Cup Restaurant, Sentro 1771, Promodor Pizza, and more. Other important landmarks and points of interest along Shaw Boulevard are CNN Philippines, Shangri-La Plaza, and Puregold main branch.